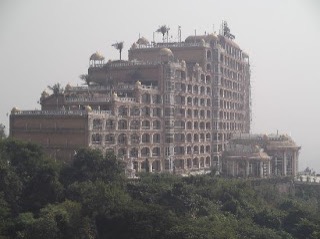 And there is more to write about India.  I left off after my slum tour of Dharavi but there were still several days remaining in my trip that definitely warranted some blog space.  Wednesday and Thursday were meant to be the “vacation” after the wedding, mainly for Dhara, but for myself and her best friend Archu as well.  We were booked in a 5-star hotel, out in the “suburbs” of Mumbai and I could not have been more excited to be leaving Kemp’s Corner. After a week of basically no sleep, I was excited about a much-needed upgrade!

It’s no surprise that when I think of the suburbs, I picture large homes, green lawns, golf courses, boats, and beaches.  From my previous blogs, I’m guessing you can tell that the suburbs of Mumbai are not like those in the US or at least F.C.C.  The suburbs are essentially an extension of the city, however as we did make it further from the city center, there was definitely less population density, and there was more greenery than anticipate; we even went through a road toll, consisting of trees as the toll dividers, and I’m sure they weren’t government officials collecting toll money (oh it makes me smile in amusement).   Sadly despite being in a less central location the trash disposal was still in lawns/fields, woods, and roads; no better than in the city.  (see field above).

Regardless of trash, we were very excited to be heading to the Imperial Palace, a 5-star hotel.  This would be the site of yet another unbelievable Indian experience.

The hotel looked amazing upon arrival, with beautiful Italian statues at the entrance, and a facade that only Hollywood would appreciate, but looks can be deceiving.  It actually looks like a palace on a hill…unfortunately it was all a facade.

http://imperial-palace.besthotelsinmumbai.com/en/ (AVOID AT ALL COSTS)

Oh lord, the gaudiness is almost indescribable.  This was evident as soon as we enter the lobby.  The hotel appeared amazing upon arrival, with statues, gold-leafed and tray ceilings with the Vatican”-esk” murals plastered on the ceiling, but the glitz from the hotel lobby was about the only “nice” features

While we waited for our 2nd room to be readied, we did enjoy a delicious lunch, however apparently the hotel was completely out of alcohol.  When we were given our room we were told we’d have a lake view, ha, but the view was literally a stone wall.

The room was literally SOILED from the last guests despite arriving late mid-afternoon, so we promptly requested a new clean room with a “better view.” The beds were unmade, there was all over the ground, the carpet was wet from lord knows what. There was mold/mildew growing on the tile floor in the bathroom from all of the air condensations, the bedrooms were absolutely appalling. The pool had broken glass scattered around, both in the pool and around the pool, and all of the chairs had wholes broken through them, and when I asked for a lawn chair there said they didn’t have any…no lawn chairs by a pool.  It was only after calling the head manager were they able to find a lawn chair, that I promptly broke when sitting on it.  Oh well, my relaxing by the pool was cut short but the flies hover in all directions.

At this point, it became quite obvious the hotel absolutely sucked.  To add insult to injury (literally from almost stepping on glass), they tried to charge us an obscene amount of money for them to hire a cab to take us to dinner.  As a result, they offered us a ride to the local market, where fortunately Dhara and Archu managed to barter our way onto a public bus.  Indian public transportation…hold your breath…that was quite an experience.

But we did have an amazing dinner in town.  We went to a delicious Asian restaurant that had amazing drinks. haha

We needed this drink after being told at lunch our hotel was “out of alcohol”. Yeah, a 5-star hotel with no drink!! WTF doesn’t describe the feelings.

The ride home from town however made the evening unbelievably more entertaining.  We took a rickshaw back and we were pleasantly surprised to find that our ride home managed to make it up the long uphill slope to our hotel.  All I could think during our ride home was ” I think I can, I think I can.”  lol.

And now our hotel…it really reminded me of The Shining.  I was just glad that I didn’t see two girls at the end of the hall looking at me or I might have truly freaked out.

The winning moment was when I saw…not a dead, but a dying cockroach in our hall.  That’s right it was twitching, definitely not dead… AWESOME!

I think it was between the dead cockroach and the horrible breakfast service that lead to us DEMANDING we be reimbursed and send to an actual 5-star hotel.

A brief reenactment of our breakfast…We place our orders… I order an omelet with mushrooms and tomatoes and cheese.   40 mins later I get my order, but it might as well have been frozen.  So I ask for them to bring it back heated, which really only entails putting it in the microwave…but instead, they bring me back an omelet with onions and mushrooms.  Where I promptly asked, why are there onions??!!.  And the response was “well we ran out of cheese so we used onions instead.”  HAHA This was my breaking point.  Where I promptly DEMANDED for the manager and my friends were in the exact same position as me.

No Cheese, let’s use onions; awesome decision! Oh, man… I was so unbelievably happy that we relocated to the Orchid hotel in the city center because I can’t honestly ever imagine any hotel/human making the decision that cheese looks or tastes like onions and should ever be used as a substitution for one another.  I’m still angrily laughing about it! SERIOUSLY!  Oh boy!

It was awesome that we were scanned upon leaving as well.  HA